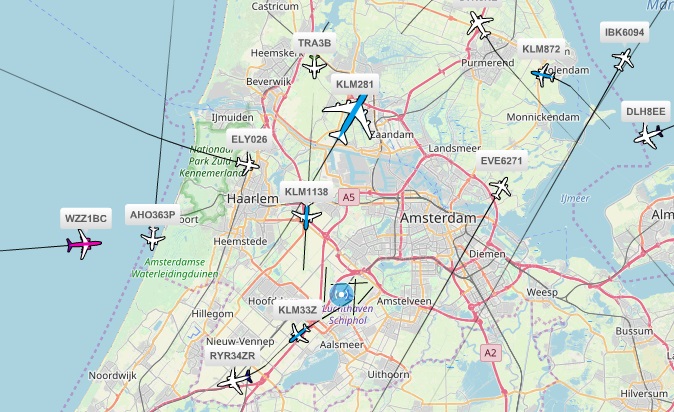 I was looking for a way into my next blog theme. I’m interested in the natural world and how the digital world impinges on that. All I needed to do was look up into the sky.

Living so close to Schiphol means aircraft are regularly overhead – if I had still been living in Amstelveen I would have described it as a metallic flying wall of noise punctuated by brief pauzes of relative quiet. What is interesting about the digital experience, and how this shows up in our daily lives, is that I can physically see an aircraft and then see its position reflected in (almost) real-time on a screen. Websites like Casper Flights with ‘Live Aircraft Tracking’ capture the signals transmitted by an aircraft’s transponder and from this the aircraft’s path can be plotted. Further details like flight number, altitude, speed, airport destination and Airline livery can be labeled. So I see a bird or drone’s eye view of most of the aircraft circling Schiphol with just a 40 second time delay (the delay is to allow for a smoother visualization – an algorithm is used to predict where the aircraft is going and any gaps in the signal being measured can be better accommodated). And I also have an wide choice of watching the skies elsewhere in Europe.

The correspondence between real life and digital is surprisingly accurate.

For example, a few weeks’ back, at home, the noise from an aircraft attracted our family’s attention to its random flight path. Pulling up the Casper flights website for the Schiphol surroundings, it became clear that the aircraft had missed its landing, and was going around for a second try. On screen, we could watch it doing a wide, clockwise circle around Schiphol as far west as the Amsterdamse Waterleidingduinen up North to Zaandam and back over Amsterdam to come around for a second attempt. It was nail-biting stuff. The height and speed that we could read off from the screen as it came into land, and comparing it to a flight just ahead of it, it appeared very likely that the pilot would miss a second attempt at landing. We watched the screen as the height in metres dropped rapidly, too rapidly it seemed, until finally the aircraft – like a chalk outline at a crime scene – disappeared from the screen as the little aircraft symbol superimposed itself over a Schiphol landing strip. No smoke nor sounds of explosions. Phew! The real aircraft had made its landing okay, of course.

Apart from watching rogue flights you can watch as friends depart from Schiphol or arrive from other European airports. Also neat visualizations can be made from flight data. Casper links to a couple of May 2013 items on the BBC website: In Pictures: Global Flight Paths and BBC magazine Global Flight-Paths Maps: Five Interpretations. And for a more immersive 3D view: Nederland van Boven: Vlieg Verkeer.

In the BBC magazine article, five types of viewpoints are given. The Art Critic (Estelle Lovatt) picks up on the beauty of the image, and how contemporary artists must embrace modern technology to stay relevant. The Environmentalist (Bill Hemmings) focuses on what these bright lines represent – namely raw pollution, and which countries need to step up and take responsibility in reducing emissions. The Aviation Consultant (John Strickland) is aware of the indicators of big business in the aviation hubs of Paris, Frankfurt, Amsterdam and London, or American hubs like Atlanta, Dallas, Houston and Denver, or the long-haul market and the rise of the middle class in China. The Data Visualization Expert (Damien McCloud) sees the aesthetics of a clean and simple concept with an immediate narrative, but warns that this is just a simplified snapshot that misses further nuances that could be visualized, for example, of how many people are travelling on those flights by using coloured lines. And finally the Philosopher (Mark Vernon) who wonders about the meanings of individual and collective existence, and suggests the darkness of the map could represent a collective unconscious crisscrossed by a mad spider’s web that conceals the life-form behind it.

For me the magazine article with its five points of view has caught what it means to think about the digitalization of our lives as an individual human being. That is, aware of its beauty, usefulness, and even necessity, but also questioning how far digitization and technology is damaging our natural environment, what it is to be human, and how we can balance all our interests.