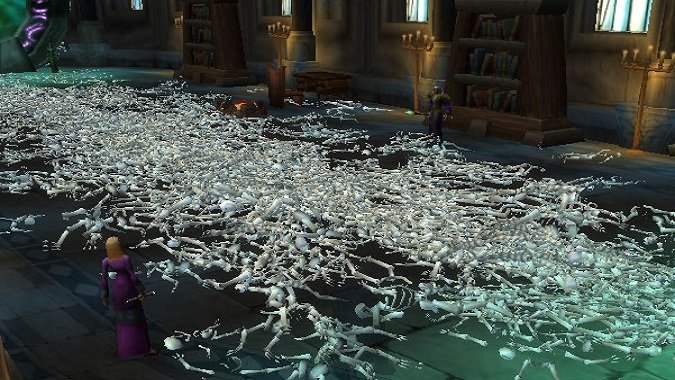 Socially speaking, (video) games are often dismissed as “childish”. Indeed, those playing games, physical or digital, are often seen as having nothing better to do, and engaging in something that is quaintly inconsequential, read: a waste of time. Yet despite that, games can already offer insight into economies via virtual markets and, as researchers discovered in late 2005, a new potential for epidemiologists.

Allow me to set the setting: it was 13 september 2005, a new patch of the MMORPG World of Warcraft just came out, adding a new area to the game alongside a new boss: Hakkar, the Souflayer (remember, this is from a time of very straight-faced high-fantasy). As part of the boss-fight, the monster would infect players with a “disease” which would apply a debuff to the characters, draining their health and allowing them to spread it to nearby characters. The intention of this digital virus called “corrupted blood” was to force the players to spread out during the fight against it, or else be continuously stricken by the disease.

There was, however, a small oversight: pets could be infected too. Frail as pets are in the game, they could be recalled into an extra-dimensional space, saving their lives by remaining in stasis. However, once returned in highly populated areas of virtual cities that marked the world of Azeroth, players would release the pets into the world, who’d still carry the disease, carrying the disease outside intended bounds, and into densely populated areas of the servers on which a couple million people played.

Like diseases do in real life, the ‘corrupted blood’ would do little to more powerful players (mirroring a diseases softer grip on healthy adolescents), but it proved fatal to the lower-level newbies, who had simply less hit-points to survive it (mirroring the situations of those very young or old, or immunocompromised). The reaction was immediate, people evacuated the great cities, moving towards smaller settlements and other places. People who had healing abilities would act as first responders, attempting to cure players but in doing so ending up catching it themselves, as well as preventing the disease from burning up too quickly. Quarantines were set up both by players, as well as issued from Blizzard itself. Just like real life quarantines, however, they also failed to be airtight. Whether it was the disaster tourists catching the plague while visiting the devastated cities, the ‘trolls’ intentionally keeping it alife and reinfecting areas, or the fact that npcs (non-player characters) could catch the disease but never dying from it, becoming asymptomatic carriers; the disease proved to be too much to handle. The plague lasted in total for about a month, after which Blizzard reset the server, ridding everybody of the disease, and making pets immune to the effect.

What is fascinating about this event, dubbed the “Corrupted blood incident”, is that it made scientists realise a new potential way for simulated studies of human behaviour during pandemics, enacted in digital cyberspace, yet with real human behaviour. Certainly, this isn’t exactly true to life; people actings as ‘trolls’ purposefully infected people with the plague does happen in real life too, but at a less drastic way, nor do few diseases spread that fast, but It shows that games aren’t merely a time-waster (and those who engage in them as ‘childish’ or ‘wasting time’), but also allow for being subjects of research, if nothing else. Of course, we may be ‘only’ talking about digital games, which influences people’s behaviour in a myriad of directions, but these games are played by real people who have real investment in these games, which should be respected. If anything, oversight like these make up for a good story to write a blog post about.

I'm a dork who loves dnd