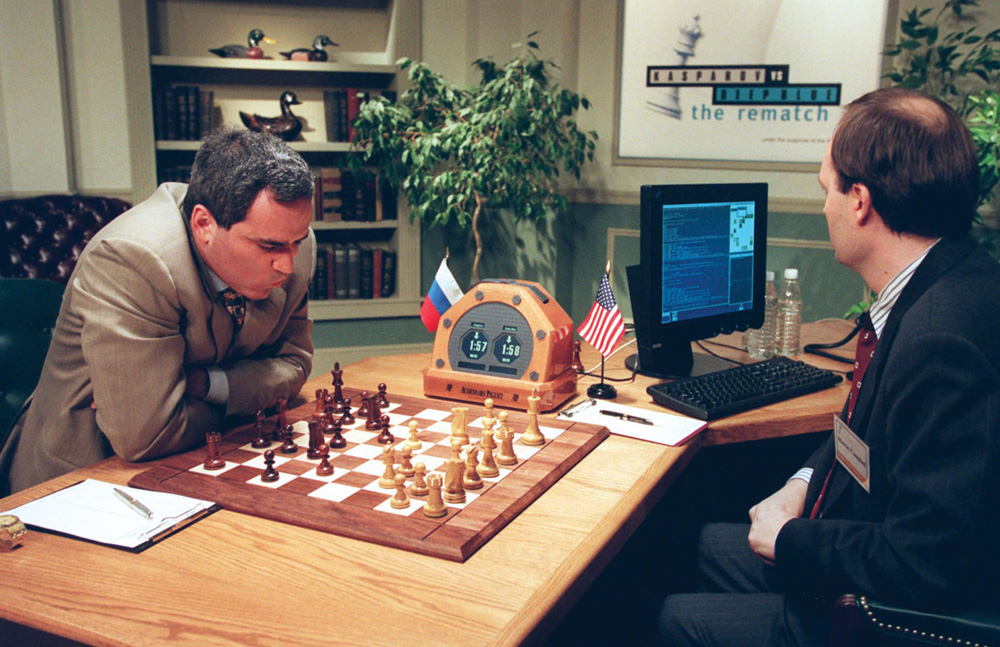 Recently we have talked extensively about computer games and virtual worlds created by humans. However, I want to talk about a physical game that we brought computers into, Chess.

A main problem in the early Chess engines was the amount of computing power needed for computers to calculate the best moves. Usually computers played brute force chess. meaning that they examine a large amount of possible moves and thus an array of outcomes. There was also research trying to get a computer to imitate human thinking during a chess match. The advances of technology eventually solved this by allowing brute force to become a viable option.
In 1977 there were already computers that were capable of examines all possible moves to play in a chess game and the outcomes. This took a large amount of time and that is why a computer during that period could not beat a human player. Chess competitions have a time element in them and such computers would lose chess games just because of this crucial factor.
The first computer to beat a grandmaster in a competitive setting was called ‘Deep Blue’. Deep Blue played against the then world champion Garry Kasparov. The victory was not total; of 6 games played, Deep Blue won 4 and after this last game, Kasparov was furious, walked away with frustration from the table and later arguing about his loss which can be seen below.

After this, the advancement went fast and it is now accepted that a human can no longer beat a computer. this led to the new top players of chess versing each other. The computers faced each other and advancement kept being made. New programs beat the older ones and one of the lead players was called “Stockfish’. Stockfish saw many iterations and kept the top position for a long time. A new opponent rose through the field in the form of Google’s ‘AlphaZero’. AlphaZero was a neural network based engine that beat Stockfish with only 4 hours of training against itself and no input other than the Chess rules.

The game of Chess was changed by immensely by the advent of computers allowing people to enjoy practice by themselves without the need for a human opponent. It also changed moves by finding new moves in positions human would’ve never considered.

Through this way computers have influenced our physical games as well. Chess is not the only one, many computers have also been created for the game ‘Go’ and there are likely to be many more such engines/programs/machines. If it is for the better, I’m not sure, it removes the element of mind games, a computer can’t be tricked in ways that can aid you during the game. The emotional setback one might feel during the loss of a mispositioned queen piece won’t affect the machine. Yet the positives effects on the games should also not be forgotten.

Thank you for reading this blog! Do you know other games which computers have influenced in our physical world? I’d love to hear.

If you want to play a match of Chess against me, let me know in the comments and we can set something up!