Tone indicators go way back, all the way to the late 16th century when a man named Henry Denham tried to introduce the percontation point. This is simply a mirrored, backwards question mark which he wanted to be used when a statement in printed media was meant to be sarcastic. This followed the introduction of several irony punctuation marks which had been used to denote irony in print media in the years before.

From what I have seen, the most commonly used tone indicator is the /s. But where did that one come from? The /s as we know it today originated as a humorous XLM closing tag, </sarcasm>, which was again shortened to just be /sarcasm before efficiency took it a step further and made it just a /s (Khodak). Its most common use was then on forums such as Reddit in order to prevent misconceptions about a comment or question given in response to a post.

With the increase of people posting and commenting on not only forums but also on social media like Facebook and Twitter, more and more tone indicators have made their way into use (New York Times). I looked up a list and I gotta say these are making less and less sense now. 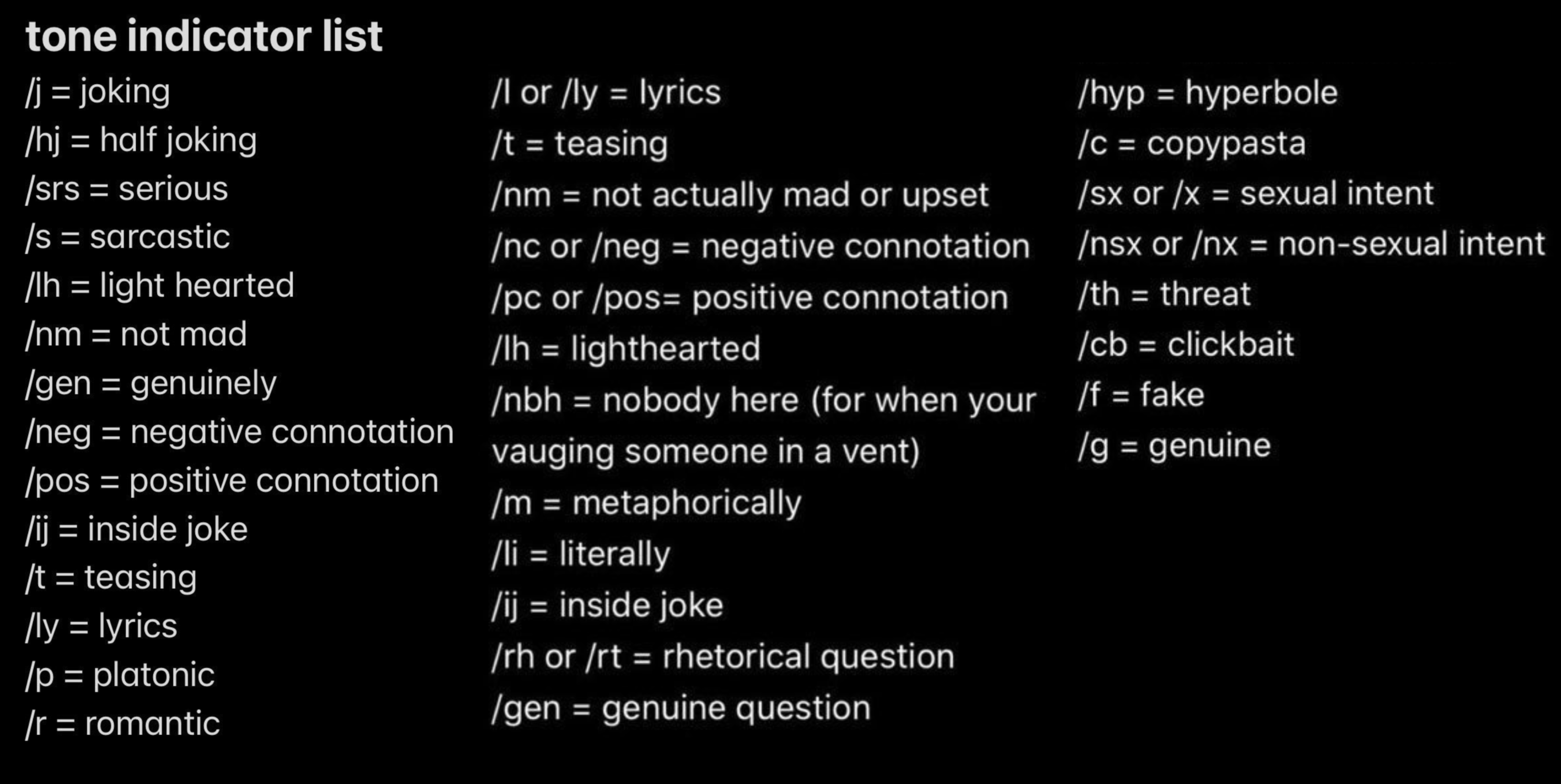 As you can see, the list has the ‘bare essentials’, such as sarcasm, joke, genuine, serious, etc. but there are also very specific indicators, like /hyp for hyperbole and /nbh for nobody here. The way we interact with others online has resulted in online communities finding it necessary to create more indicators to make sure conversations go as intended. The indicators have transcended their use as just a quick indicator for a comment to being used by entire communities online in order to stay safe and prevent big misunderstandings.

Why are tone indicators useful?

These tone indicators are very useful in cases where simple text on a screen or paper might not convey your intended tone. And while you can go and try to make the tone come across the way you want it to, this can go to the cost of your joke or intended sarcasm. Besides saving your funny little comment, this also helps to solve part of the issue of misunderstandings due to a lack of language mastery. You can denote that something is sarcastic and a person who might not speak English or any language you post in well enough to pick this up can do that just fine now.

The biggest reason why people are advocating for the more common use of tone indicators today is that it makes it easier for people with neurodivergencies to pick up the tone and intention of a comment which they wouldn’t have been able to do before. Think for example people with autism who struggle to pick up tones in face-to-face conversations. Online there is even less indication of tone in a conversation. In cases like this, tone indicators can help people comfortably communicate.

There are of course people who disagree with the use of these indicators, who think they are stupid, useless, or make it seem like some people, often neurodivergent people, are unable to think for themselves. While it is a valid concern that tone indicators might be used to talk to disabled and neurodivergent people like they are less intelligent or like they need to be babied, I think that when someone uses indicators for themselves there is no inherent ableism or intent of harm.