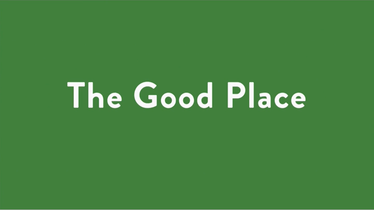 * Spoiler warning for The Good Place*

A couple of nights ago I finally got the time to watch the new episodes of The Good Place. It is a lovely sitcom tackling moral philosophy dilemma’s. As I was watching the episodes I suddenly realized how much more complex the series has gotten since its first season. And I was stumbled by the idea that the storyline had completely hidden away the underlying complexity of the struggles the characters were facing. The series has very much a didactic element, teaching the verily elitist academic theories to the mainstream public. Hereby trying to educate the public, just like the series characters are doing among each other.

For all of you that do not know or watch the show, let me quickly explain. The series focuses on the character played by Kristen Bell, Eleanor. The observer immediately knows she has died and has gotten into ‘the Good place’ (relatable to the idea of heaven). But, as the observer later finds out, Eleanor seems to have been part of a mix-up and does not belong in the Good Place. She then turns to her ‘soulmate’ Chidi (William Jackson Harper), who was a moral philosophy professor before he died, and she asks him to teach her how to be ‘good.’

Within the show, they question different moral dilemmas and discuss many of the complex moral philosophy theories, like Kant or Utilitarianism, in an easy way. As an observer of the show, it is easy to follow the, relatively, simple storyline. But as the series moves along its storyline also gets more complex, step by step they move into more difficult moral theories and ideas. Just like a learning experience, the series builds on the knowledge the observer has gotten throughout the show.

Because of its easy accessibility and the sitcom framework, the show seems very much just like a comedy show. But this didactic element is what intrigues me. Especially regarding the idea that this mainstream media platform (tv shows or series) is another way to bring difficult theoretic ideas to the public. To reach a wide audience that can learn through this series, without even knowing.

And that is what I extremely like about the new digital media era, that brings streaming devices like Netflix and Disney+, it is accessible for anyone with a WIFI connection, a streaming device and the app. Thus, it is THE way to access the biggest global audience you can get. And that is why I am so intrigued by this show. The series brings together the philosophical ideas, often stereotyped as boring or ‘vague’, to a very concrete and mostly extremely funny series. Hereby not only accessing the academics or the philosophy fanatics, but also the mainstream public. It is a new road for academic theory and a new road for ‘educating’ society in a fun matter.

So what does this mean? It means that digital media and all of the technology developments it has brought to society nowadays can be used originally in a way to make complex ideas accessible for an audience that might not be interested in philosophy at all. It is mixing something the wide public knows and loves (sitcoms and humour) with something they are not necessarily that enthusiastic about (learning and philosophy). I think this a great way for the, mostly, elitist theories made by and for the academic public, to gain and achieve what they have always wanted: an audience that listens. (or in this case watches)

So this blog is a bit different from my other blogs. But I wanted to show how popular digital culture, like Netflix TV shows, can show and tell us a lot about culture in general and society as a whole. And the series, that integrate theory and pleasure together, can be another more efficient way to reach the wide audience and make a change with the discovery made by academics. And The Good Place is a good example of how we can integrate academic theories with the wide public, and teach (in a not so straight forward way) the observer’s something about it. To make theory accessible, in a digital and mainstream way, within the public space.

Read more? Check this out: