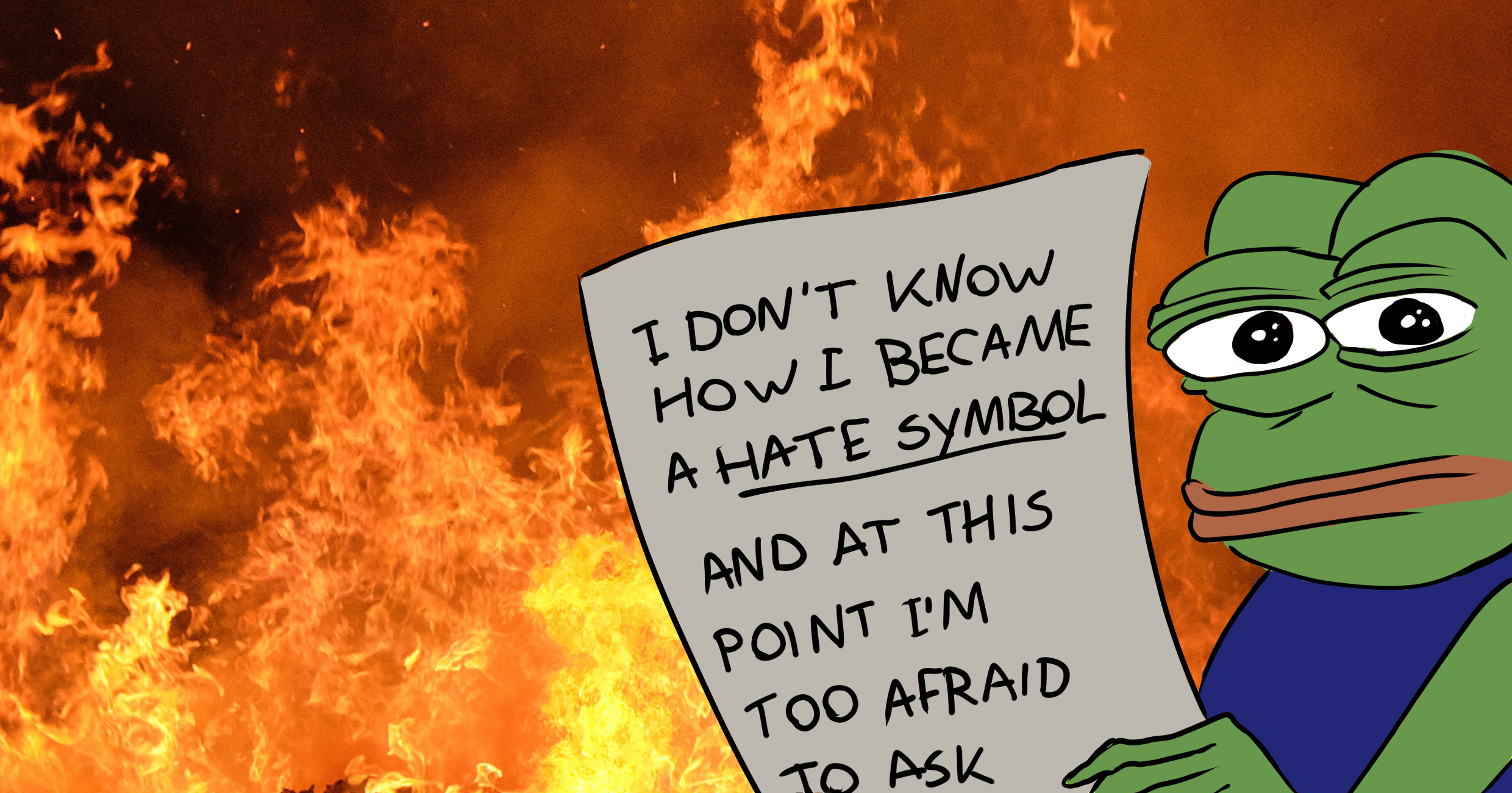 If you are reading this, you have probably seen Pepe the Frog before. You know, that little green b*stard that’s been terrorizing every conceivable social media platform since the 2010s. I think anyone that’s come up with the internet has sent and/or received a Pepe meme at some point. I know I have. The interesting thing that sets Pepe apart from other memes is the trajectory he has gone on and his longevity. Some memes have very short shelf lives and are forgotten within a matter of weeks, while other memes have a longevity about them that allows them to remain relevant for months or even years. Something about that funky little frog made him so adaptable that to this day you’ll still see iterations of the Pepe meme around. During his many years on the internet, Pepe has gone on quite the journey. He started as a harmless little meme frog and eventually turned into a registered hate symbol. Yeah, you read that right the epic funny meme frog is a hate symbol.

In this blog post, I want to give an overview of how the Pepe the Frog meme went from harmless internet funny, to a symbol of anti-Semitism and white nationalism, and finally a symbol of… hope?

Strap in for quite the wild ride.

Pepe the Frog started as a silly character in a comic called “Boys Club” by Matt Furie. That poor man did not know the can of worms he just opened. Furie posted his comics to MySpace and from there it spiraled. Initially, the image of Pepe was used innocently on fitness forums, believe it or not. Over the years the meme migrated over to 4chan. Pepe the Frog became immensely popular on 4chan, inspiring the creation of many board posts and Pepe derivatives. As is the nature of a meme, it is to be constantly reimagined and evolve along with the online landscape they are in. So, that’s what Pepe did, he evolved along with the landscape on 4chan.

4chan is an anonymous image-based internet forum that is known for being quite offensive. Throughout the years, 4chan has been accused of being a breeding ground for racism, anti-Semitism, and all the other bad -ism’s. Pepe became somewhat of a 4chan mascot. The memes, initially, were not explicitly racist or too offensive. He was just a sad frog. It wasn’t until Pepe started breaking out into the mainstream that 4chan users started to go to extreme lengths to create the most offensive Pepe memes possible. Pepe the Frog and 4chan felt intrinsically connected to the users and now all these filthy normies were coming in and making him a mainstream Facebook meme. Tie this in with the absolute media chaos that was the 2016 American presidential elections and you had the perfect recipe for disaster. A movement began on 4chan to turn Pepe the Frog into a white supremacist symbol and tie him to the Trump campaign. This led to an onslaught of racist Pepe memes being posted online. Pepe also bled over into ‘real-life’ as some users went as far as wearing Pepe masks at rallies. Trump himself even retweeted a Pepe meme. This was 4chan’s way of reclaiming Pepe, by all means necessary. If he became a horrific symbol of hate, then 4chan would get their mascot back.

Now, what really gave this movement legitimacy was the media. As it was so tied to the presidential elections, every news outlet imaginable jumped on the story. Hillary Clinton’s campaign website even added a page detailing how harmful Pepe was (the original is no longer up). I think this is where the disconnect between the mainstream media and internet culture comes in. I’m pretty confident that to most of us, Pepe is just a slightly dated meme frog. And that is all he’s ever been to the majority of people who’ve spread Pepe memes. The people ‘weaponizing’ Pepe were but a very vocal minority, however, many news outlets never addressed this vital little nuance. Anyone familiar with online culture would know that all trolls want attention, once you acknowledge them you’ve already lost. The media did this on a worldwide scale by reporting on the issue in a very sensationalized manner. This all eventually led to Pepe the Frog being placed on the Anti-Defamation League (ADL) registry as a hate symbol for racism and anti-Semitism

Obviously, what this group of 4chan users was doing was wrong and harmful to many people. It is hard to deny, however, that the mainstream media played an enormous role in the movement spreading as far as it did. Pepe is not inherently racist and he never was. Even the ADL website disclaims that in most contexts, Pepe is not meant to be a hate symbol of any kind. In the face of overdramatized reporting and a perhaps generational gap in understanding online culture, such nuances are easily lost. And that, is a very dangerous thing.

That is not how Pepe’s story ends, however. In a turn of events no one saw coming, Pepe became a symbol of hope. The Hong Kong protests that started in 2019 started using Pepe as their mascot. He symbolizes youth participation within the movement and is widely beloved as protestors spray paint him on government buildings in protest, have Pepe the Frog plushies, and wear Pepe the Frog masks. This iteration of Pepe was devoid of any racist connotations and perfectly showcases that context, does in fact matter.

Let me know what this insane series of events made you feel! Did you even know about Pepe being a hate symbol?