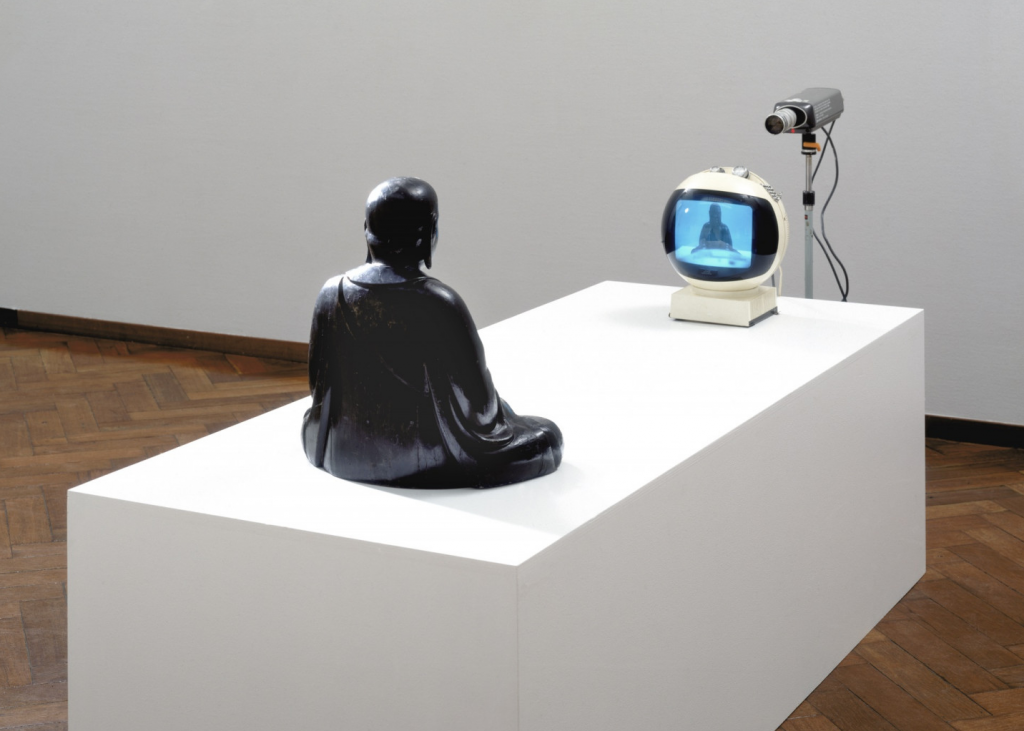 One of the artists that I still have not forgotten from my first year at Leiden University is the one and only Nam June Paik (1932 – 2006). Paik was born in Seoul, Korea yet lived and worked in Japan, The United States, and Germany. His work combined different artistic mediums, and he is known well for his work with video and television. He is considered to be the “founder” or “father” of video art, as it is argued that he was the first artist to make art through the use of videos. Paik saw technology as a way to connect with others and share art around the world and often brought themes of Eastern philosophy, such as Buddism, into his artworks. He advocated for the idea that TV media should become global, as to unite the people of the world.

The thing about Paik’s artworks that stuck out for me was his paradoxical relationship with television media. While Paik believed television could unite us in a democratic way, he also argued that people become too passive when they are watching TV (as it was a passive way of receiving information). The paradox here is that while he believed television could be collectively empowering, it also makes us collectively lazy. One of the ways in which Paik represented this problem clearly to us was in his 1974 installation TV Buddha. This artwork installation (as seen in the image above) consists of a Buddha statue placed in front of a small TV screen and a camera. The camera is working at a constant, displaying on the television in live time what is placed in front of it. It is argued that it seems as though the Buddha is stuck there forever in a never-ending loop of recording. The Buddha represents this lazy, passive figure that Paik is trying to warn us about. Yet he ties this in with Eastern philosophy by using this religious figure as the representational object. Buddha is able to reach higher planes of being and spirituality through his tranquil meditation, which is nothing close to what Paik believes television does for us.

Another important aspect of TV Buddha is the role of the viewer in facilitating meaning. As the statue is immobile, the video on the screen does not change or ‘become art’ as Paik would believe it until the viewer takes an active role. This could be by walking behind the Buddha in front of the camera, for example. In this way, Paik is encouraging us to actively use this passive medium. This artwork also comments on the constant surveillance of society that is fueled by technology and digital media. This problem is still present in society today, and there are constant debates about privacy and surveillance.

How, when, and why should society be watched? This is a question that I think about often. It seems as though human society will never be able to agree on video surveillance. I always hear all of these stories about apps that can see everything on your phone and take all of your “data” (an ambiguous word if you ask me), etc. I personally couldn’t care less if the government or certain apps were tracking my phone because I have nothing to hide. I understand that the same doesn’t go for everyone though.

In general, I think that the intersection between the digital and art can be useful in commenting on our obsessions with digital media and the pros/cons thereof. Nam June Paik’s artworks hold a legacy that will surely be remembered for years to come.