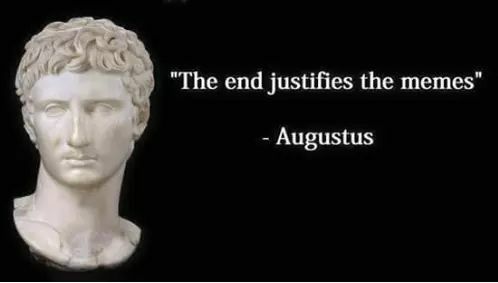 “An image, video, piece of text, etc., typically humorous in nature, that is copied and spread rapidly by Internet users, often with slight variations.”

This definition has been given to the word by the Oxford Dictionary. But to really get a feel of the meaning it is better to look at the somewhat dramatic definition that the Urban Dictionary gives meme: “The cure of depression”. I think I can safely say that almost everybody has at one point been confronted with memes.

In our current information society, our attention span has become shorter. People are doing three things at the same time and nobody really has time anymore to really search for things. Because let’s be honest, how many people go to the second page of Google search? Something that is not in line with this new type of society is the study of ancient cultures, where a lot of things are not easily ‘googable‘ and take time to figure out. You really have to go to the library sometimes to physically grab a book and read it. For the real fanatics this is not a problem, but a lot of people really miss the fun of (ancient) history. This is where I think memes form an almost perfect solution. Historians have formed all types of neo-tribes on (for example) Facebook and you can have your pick really. All area’s of expertise have their own page and you as a user can like them to have access to fun memes about your passion. Daily! This type of co-existence really is defines by reciprocity, interaction and the sharing of passion and emotion.

I am a huge fan of memes that are about my studies. We also circulate them among our classmates because sometimes they are so accurate. Some of the pages I absolutely adore are Classical Studies memes for Hellenistic teens, Classically Classical Classics Memes, Dank Latin Memes and Edgy Egyptian Memes. While some are absolutely ridiculous (see picture above) and have no historical accuracy at all, others are historically accurate. The best ones even use modern times and combine them with something old. Because the audience is interested in these subjects, even the comment section is worth reading sometimes because they offer extra information. Some history memes need explaining if you aren’t familiar with the subject. For a really good example, see the picture below. Now, if you aren’t familiar with this man, you will not get the joke (if this frustrates you, just ask).

Ofcourse there is also a downside to all those memes. Some are not accurate at all but try to portray it that way. So it really is important to stay critical and not believe everything that’s in the meme. But maybe those faults can be good, because I sometimes Google stuff to see if it is indeed accurate. So it can also boost a persons interest in the subject. Overall, (historical) memes really up the game. They are not only funny, they can also be informative and link the present to the past.