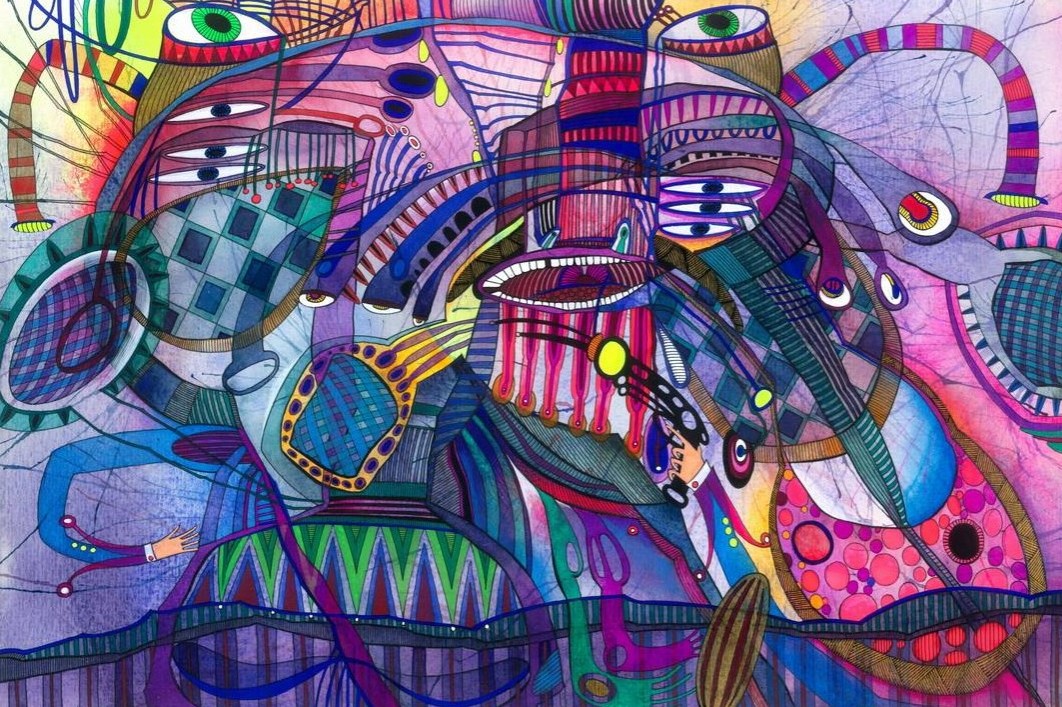 Pop a tab, slip under an MRI and what you would see might surprise you. Brain networks that normally handle vision, attention, movement and hearing communicate with each other in novel ways, leading to what looks like a “more unified brain”.

What I would like to zoom into, however, is the Default Mode Network. Scans revealed a deactivation of the tightly linked set of structures connecting the prefrontal cortex to the posterior cingulate cortex, and deeper older centers related to emotion and memory. This Default Mode Network is said to be involved in self-reflection and ‘autobiographical memory’, which is central to the narrative we construct of who we are. Psychologists may speculate that this is where the ego lies. And so, with LSD, we have a coup d’état of sorts.

So the dictator of your mind has abdicated, and your brain is officially off the leash. What now?

We see a temporary rewiring combined with an absence of control (or ‘self-talk’) allowing the brain (and mind) to jog out of its habitual and often destructive patterns. This is where I feel it is no coincidence that the disorders that psychedelics treat most well are those which are manifestations of a “stuck brain”. Imagine your deep-rooted anxieties, your ruminations, the parts of your being that you don’t enjoy but feel so defined by, just walking out the door. A brand new opportunity for the brain to reinvent itself and the boundaries it manifests.

Lysergic Acid Diethylamide (LSD) or more affectionately nicknamed, acid, is a prototypical psychedelic drug, and the opportunity to study its effects on the human brain with modern neuroimaging is revolutionary. Especially at a time of growing interest in its scientific and therapeutic value.

However, this isn’t LSD’s first rodeo. Beyond the myriad of conspiracies this chemical was involved in with MK-ULTRA (the CIA’s so-called ‘mind control’ program) in the 60s, LSD was mostly used by academics and medical professionals split into two camps; the ‘conservative’ (the likes of Aldous Huxley) land the ‘radical’ (often led by the infamous trippers, Timothy Leary & Ram Dass).

What the two camps agreed on, however, was that LSD had the power potential for change. By the mid-1960s, hallucinogens were adopted by the Californian youth counterculture, particularly in San Francisco, swiftly followed by the criminalization of the substance, and its listing as a schedule I controlled drug by the UN. Naturally, clinical research funding dried up, leaving us with a 30 year gap in knowledge.

People wanted to blame the drugs and not the fact that our culture didn’t have much awareness about safe use of those drugs.

But, why are we talking about this now?

Well, in 2011, James Fadiman (author of The Psychedelic Explorer’s Guide), introduced to the discourse the practice of microdosing.

Microdosing is ingesting usually around a tenth of a recreational dose in order to achieve a subtle or even ‘sub-perceptual’ psychedelic effect. Anecdotal reports concluded a general positive effect on mood and cognition whilst allowing the user to carry on with everyday activities.

He had put out a survey and was collecting data from self-reporting experimenters, particularly streaming from the San Francisco area. But who were these people partaking in this practice? The typical profile, he says, is the “übersmart twentysomething” curious to see if microdosing will help them work through technical problems and become more innovative. What they reported was an alleviation of depression, migraines, and chronic-fatigue, and improvements in creative performance, physical energy, and the ability to focus.

Now, I don’t really want to get into Fadiman’s ‘recommendations’ into how, when and why to microdose, because that’s besides my point. Where my curiosity lies however, is the rampant trend of microdosing in Silicon Valley (particularly that most of the intellectual leaps taken in this field of research were carried out in the San Francisco area) and broadly speaking, amongst the ‘innovators’ of our time.

Scientifically speaking, creativity is an intricate web of abilities; generating ideas, solutions or products that are novel yet pertinent. Here, in the Netherlands, the Psychedelic Society (PSN) organized a microdosing event during which they investigated this claim of enhanced creativity and found that it enhanced divergent thinking and the ability to generate novel ideas to open-ended problems. Considering the sensitive nature of such a study, all the participants were aware that they were receiving a microdose, which in research is perceived as a caveat (due to the potentiality of placebo effect) but for the purposes of illustrating my larger point, I see this as the edge. We’ll get back to this in a bit, but first…

Use it or lose it…But unclog it first?

Our brains change physically, functionally and chemically as we pick up any abilities or skills. What we experience as “Wow, I finally understand/know how to do this” is in fact the brain adapting its local wiring and maneuvering the connections that constitute our behavior. However, the pickle lies in the fact that we are creatures of habit, after all. Over time, we reinforce certain connections in our brain, thereby disincentivizing other areas to communicate leading to a weakening of those connections.

The often disordered altered state of consciousness that LSD brings about serves as a catalyst for the forming of new connections. The suitcase that is you is emptied on the floor, and you suddenly have the unconstrained opportunity to make new connections. Decide what goes where, what you can throw away and what you might actually need but don’t yet have. And this is perhaps why we see it leading to slight improvements (in combination with psychotherapy) in resolving psychiatric disorders that are often characterized by inflexible, habitual patterns of brain activity. It unclogs your brain!

Flash forward to today. Media reports on microdosing’s rising popularity among the tech-workers in Silicon Valley and the reinvention of its reputation in the context of cognitive enhancement has captured the attention of a much broader demographic. Author and journalist Michael Pollan stated that he was not surprised Silicon Valley would be behind that push as he points to the range of other tech-fueled efforts that are on trend right now: from fasting and food hacking to nootropics and attempts to stop aging, and even death.

And as a matter of fact, the trend of ‘smart drugs’ didn’t even start here. Kids in their explorative phases of development find themselves bound by competitive environments and dense schedules, spreading them far too thin and leaving them with far too generous prescriptions of Ritalin and Adderall. As Anjan Chatterjee, a professor of neurology at the University of Pennsylvania, said:

You start people in a rat race of competition and that’s what they know for the rest of their lives. There’s this sense that there are a limited number of rewards out there and everybody has to compete for them…It’s tough – but you do it by any means necessary.

And this is where I would like to get back to our edge.

I’m a firm believer in the lucid capacity of the human mind. If the study conducted by the PSN was indeed biased because of the participants’ awareness, then that suggests the power of the placebo, per se. When we look at the effects of LSD and the reports of its users, there is a clear pattern of the necessity to break out of negative and destructive patterns in order to make room for growth. Steve Jobs said it best when he specified that LSD “reinforced” his sense of what was important, rather than declaring it was the substance in and of itself that gave him that sense or intuition.

Our mind – and the biology magic that orchestrates it – is f**king powerful. Far more powerful than we can begin to conceive.

Having said that, I (obviously) don’t disregard the medical treasure that LSD might possess for those who are struggling with chronic conditions or addictions, in fact I think it is paramount to further investigate the potential benefits and side-effects of the possible remedies we have at our disposal. But I do believe that these trends are all pointing towards a greater social critique that might require a little more of our attention.

Rather than hacking our intelligence and replacing one dependency with another, I think it might be worth emulating (and when necessary, simulating) the beneficial effects these substances may have in store for us. There are often no boundaries for our cognition until we conceive of their existence and consequently manifest them.

Examine your own personal set and setting: What is your mindset telling you about your environment and how is said environment affecting your mindset. Be in tune with your own being through taking regular and qualitatively meaningful time with and for yourself. Thanks to our capitalist society, our sense of being has become inextricably linked with our productivity or our capacity for doing, when sometimes we have to relish in the ‘being’ to allow our minds and bodies to tell us what they really need.

And with this manic flow of thoughts and information, I’d like to leave you with the words of perhaps the most misunderstood man in the field of psychedelics, Timothy Leary, a clinical psychologist who was also dubbed ‘the most dangerous man in America’ by the not-so-harmless President Nixon.

Turn On, Tune In, Drop Out.

As he explains in his 1983 autobiography, Flashbacks:

Go within to activate your neural and genetic equipment. Become sensitive to the many and various levels of consciousness and the specific triggers engaging them. Drugs were one way to accomplish this end.

Interact harmoniously with the world around you—externalize, materialize, express your new internal perspectives.

An active, selective, graceful process of detachment from involuntary or unconscious commitments. Self-reliance, a discovery of one’s singularity, a commitment to mobility, choice, and change.

“Unhappily, my explanations of this sequence of personal development are often misinterpreted to mean “Get stoned and abandon all constructive activity”